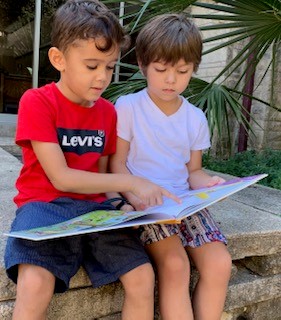 While toddlers frequently say “no” as a matter of principle, by the time your child reaches the preschool years, they likely have a legitimate difference of opinion when they argue. And that’s fine—great actually. We want our children to think for themselves, to examine the information available to them and form their own opinions rather than blindly following others.

This is actually a big focus in Montessori classrooms. Rather than a teacher dictating information to the children to memorize, they are encouraged to explore the environment and materials provided and to discover things for themselves. One of the purposes of this method of teaching is to help children form an identity as free thinkers, as scientists and self-learners who are capable of discovering knowledge and drawing their own conclusions.

Even if they’re not trying to be rude, if they’re just trying to assert themselves and share their thoughts, young children’s arguments can seem rude and abrasive. They haven’t mastered the art of respectfully disagreeing in a way that makes others want to hear them out.

As mamas, if we can look past the rude language and avoid getting mad, there’s a great opportunity to help our children learn how to disagree respectfully, which will help them be heard.

Try these phrases to teach your children how to respectfully disagree:

If you can see that your child is about to argue, beat them to it and ask for their thoughts. This changes the dynamic of the interaction, making it cooperative rather than combative.

2. “Do you have a different opinion?”

If your child says something like “No way!” or “You’re wrong,” invite them to share their opinion. By staying calm you will show them that you’re open to discussion and they will become less defensive and quick to argue over time.

4. “You can say ‘I have a different opinion about that.'”

Sometimes you explicitly have to tell your child what to say, like offering them a script. When your child disagrees with you in a way that seems rude, offer them a better way to express themselves. Take a deep breath and give them the benefit of the doubt that they’re not trying to make you mad, and give them a do-over.

5. “I hear that you disagree. How can you say that differently?”

After you’ve practiced more respectful ways to disagree a few times, prompt your child to think of a more polite way to phrase an argument, rather than giving them the script. This will help them internalize and really practice socially acceptable ways to disagree.

Using a moderator can be a powerful tool for children and adults alike. If you have a really strong disagreement—maybe your child wants to have their first sleepover and you’re not sure they’re ready—try using a moderator like an aunt, uncle or friend. The point is to model the process. Make sure to choose an issue where you’re okay with either outcome or it can backfire!

7. “Wow, you have a strong opinion about that.”

Many times, all a child needs is to know that they are heard. By validating your child’s dissenting opinion (“Wow, you have a strong opinion about what shoes to wear!”) you can often diffuse the situation.

The more your child sees you staying calm during a disagreement, the more they will follow your lead.

Children really do as we do, not as we say. We can talk to them all day about disagreeing respectfully, but in the end, they are going to copy what we do.

Try to find opportunities to model respectful disagreement in front of your child. It could be as simple as inquiring about a receipt that doesn’t seem right or offering a different opinion to your spouse about what restaurant to go to.

Show your child that it’s okay to disagree, and it can be done without anger.

9. “You didn’t want to play cars. What could you say to your friend?”

Whether your child is the type to run to you for support every time they have a disagreement with a friend or the type to hit or yell at their friend if they disagree, you can steer them toward a more effective social dynamic.

At first, you will likely have to help your child a lot to think of ways to respectfully disagree with their friends, but with practice, it will become more natural for them.

Role playing is a powerful (and fun!) tool that we use all of the time in Montessori classrooms. If there is an issue in the classroom, such as children bumping into each other without saying “excuse me” or children distracting each other from their work, we take turns role-playing acceptable ways to handle the situation at group time.

Make sure to try their suggestions as well as your own!

The peace rose is another tool used in many Montessori classrooms that’s very effective with some children, and not with others, but it is certainly worth a try.

The idea of the peace rose is that two children who are having a disagreement can pass the peace rose back and forth as they each take a turn to talk. They are encouraged to express their feelings and opinions about a situation and brainstorm a solution.

It can be discouraging when it feels like your child argues over everything! Just remember that you are raising a strong, independent thinker who will be able to challenge authority and peer pressure when necessary. With your help, they’ll learn to do so in a way that will serve them, rather than antagonizing others.