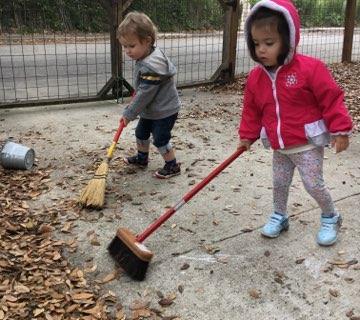 We know very well, in theory, that the first six years of the child’s life are the foundation on which the rest of their life rests. A child’s distinct personality asserts itself long before those six years are over. What seems like frustrating behavior, on the surface, is simply the child’s attempt to break out of the cage of babyhood and move towards independence.

Maria Montessori often spoke of the awe and wonder that adults should have when working with young children. It’s easy to lose that awe if we focus on the negatives rather than the positives. I love the fact that in Montessori, we empower children to do daily tasks themselves.

The more respect we can show them for their own choices and actions, the less conflict there will be. From the dressing frames to snack preparation, we’re removing barriers to the child’s independence. We’re basically saying to them, “I think you can do this!”

At home you can set up the bathroom so children can reach the sink and faucets. Model the process of handwashing and teeth brushing and step back and give them time to try it out! Let them pour their own water and help with simple food preparation such as spreading cream cheese on toast, and peeling and slicing bananas. Check out Montessori Services “Small Hands” https://www.forsmallhands.com for small utensils. Encourage nose blowing by giving the child access to a mirror, tissues, a stool, an easy soap dispenser, and small towels. It’s a great way to cultivate independence.

As we assist the child towards independence it’s also a good goal to find ways to say ‘no’ without using the word ‘no’.
Children hear ‘no’ so often, it loses its meaning. It also begins to trigger an automatic response of defiance. By finding other ways to state it, you’re able to convey ‘no’ without all the baggage that ‘no’ usually brings.

Examples include saying “Danger!” when a child reaches for a wall outlet, or “Not for _____ (child’s name)” when a child tries to grab some candy. Other options include:
“We treat others nicely.”
“Let’s see if we can find a better way.”
“We’re going to do this right now instead.”
The next time you’re about to say “no”, try rephrasing it. You may be amazed at how different the response is.

The Montessori method gives us that elusive key to understanding and encouraging children through the toddler years. Let’s use it!